‘Invest in the future, not the past;’ green business key to winning war on climate change – UN chief

12 December 2017 – Those who fail to bet on a green economy will be living in a grey future, United Nations Secretary-General António Guterres warned Tuesday, calling for greater ambition by governments, civil society, the private sector and finance partners to help tackle the global climate challenge.

“Green business is good business,” the UN chief said, speaking at the opening of the One Planet Summit, in Paris, alongside French President Emmanuel Macron and Jim Yong Kim, the President of World Bank.

“Renewables are now cheaper than coal-powered energy in dozens of developed and developing countries […] we need to invest in the future, not the past,” he added.

The Summit, taking place on 12 December, the anniversary of the adoption of the historic Paris Agreement, is providing an opportunity to fast-forward action on climate change.

In his remarks, Mr. Guterres pointed to the large under-utilized global financial resources and called for ensuing that financing – which by its nature if forward-looking – is used future of people and the planet in addition to being used for profit.

“It is a fact that fossil fuels remain heavily subsidized – meaning we are investing in our own doom,” he emphasized, noting cities, regions, states and territories across the globe along with thousands of private enterprises – including major oil and gas companies – are already taking climate action, resulting in new industries and markets as well as in healthier environments and more jobs. 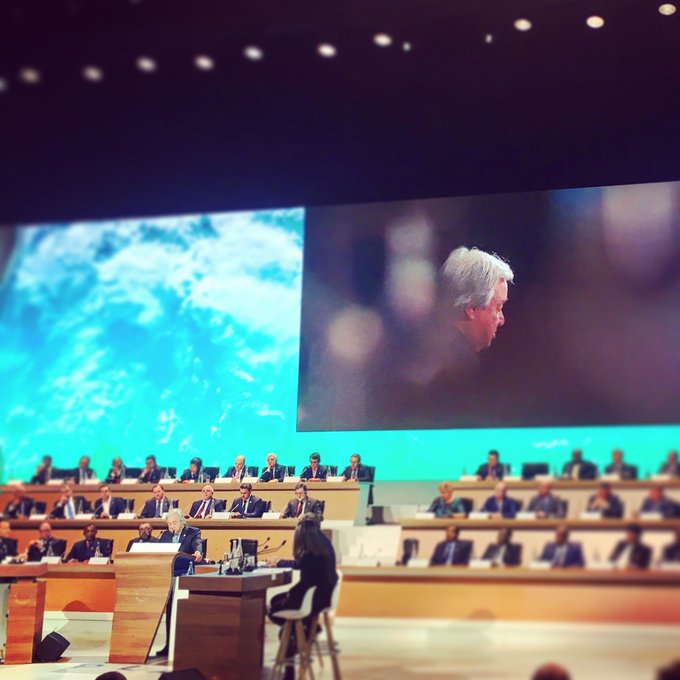 “I have heard it said that the stone age did not end because we ran out of stones. We don’t have to wait to run out of coal and oil to end the age of fossil fuels,” he stated, adding: “The message is simple: those who fail to bet on a green economy will be living in a grey future.”

The UN chief stressed that it is not funds but trust that is lacking. “We need to fix it. This means, first and foremost, ensuring that rich countries honor their commitment and provide $100 billion a year through 2020 for developing countries.”

It also means that the Green Climate Fundmust become an effective and flexible instrument, especially for the most vulnerable countries such as small island States and least developed countries. “These two conditions are essential for trust between developed and developing countries,” he emphasized.

“We need to build trust and reduce risk, make the best use of available resources, and find innovative ways of financing, such as green bonds whose viability and success are already realities,” the Secretary-General said.

Also at the summit, Jim Yong Kim, the President of the World Bank Group, announced that the Group will no longer finance upstream oil and gas after 2019 and that it would be mobilizing finance for climate change impact mitigation and resilience.

The International Finance Corporation (IFC) a subsidiary of the World Bank Group will invest up to $325 million in the Green Cornerstone Bond Fund, a partnership with the asset management company, Amundi, to create the largest ever green-bond fund dedicated to emerging markets.

“This is a $2 billion initiative aiming to deepen local capital markets, and expand and unlock private funding for climate-related projects. The fund is already subscribed at over $1 billion,” read the announcement.